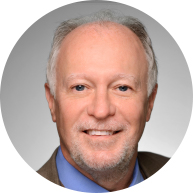 Mr. Lockman practices in all areas of intellectual property law with an emphasis in preparation and prosecution of patent applications for computer systems and software inventions as well as patent and trademark litigation.