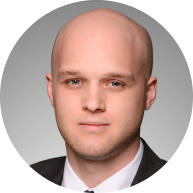 Mr. Roby practices in all areas of intellectual property law, including preparation and prosecution of patent, trademark, and copyright applications.  He is a member of the bar of the State of Indiana, and is registered to practice before the United States Patent and Trademark Office.  Mr. Roby received a B.S. in Electrical Engineering from Purdue University, where he was also awarded the Grainger Power Engineering Award.  He received his J.D. from The University of New Hampshire School of Law. Additionally, he spent a summer as an extern at the United States Patent and Trademark Office where he examined patent applications.